You have come to the right place for my 9th annual Oscars predictions!

I’m not that good at it, but I’m consistent. In that I make predictions. If you copy any of these, just know…I’m sorry.

How have I done in recent years?

I typically only predict what I consider to be the major categories.

So coming March 4th, the 90th Annual Academy Awards will be awarded and my predictions will come true. Believe it.

Interestingly (okay not really), in recent years, I’ve made it a point to see as many of the movies nominated for Best Picture before the ceremony as possible. And I typically get around to watching all of the Best Picture nominees at some point. I was curious how well I was doing on that front, so I did some research (gasp!). I know, I know, pulling things out of thin air is more my speed, but this time I let the statistics be the story. #NotFakeNews

I relentlessly present with you my 8th annual Oscar predictions!

As always, I suck at this so if you copy me in any way, shape or form, you will do no better than the average monkey. Average monkeys are smart on occasion, especially in how they acquire and fling feces, so don’t fret too much.

For evidence of my suckage, see my results over the last 3 years:

I only predict 11 categories (of the 24 total), or what I consider the major categories.

So coming on February 26th, we have the 89th Annual Academy Awards!

You’ll be pleased to learn, I’ve seen all 88 of the previous Best Picture winners…so might as well make my way through this year’s nominees.

Best Picture – Up for 14 nominations (tied for most all-time with Titanic and All About Eve), it’s not a stretch to say La La Land is the favorite. Plus it’s filthy with music and dancing and hope and heartbreak.

END_OF_DOCUMENT_TOKEN_TO_BE_REPLACED

Epilogue: I picked 4 out of 11 correct! 64% wrong! Fantastic and amazing results!

The moment you’ve been waiting for!

My Oscar picks. The best 8.8 seconds of your day.

I know this is a celebratory moment of epic proportions, but calm down. Please.

Hold still long enough to read the rest of the this post.

Best Picture – When they are big and short, we like the odds.

Best Actress in a Leading Role – Let’s see what Brie is doing in that room.

Best Actor in a Leading Role – Matt shined as a Martian, but Leo was the king of the wilderness.

Best Actor in a Supporting Role – The Italian Stallion wins for his second acting nomination for the seminal role of Rocky.

Best Director – Maybe Alejandro could win two years in a row…but actually there’s something Mad about the Oscar race this year.

Adapted Screenplay – I only read one of these books, so that has to win, right? Right.

Cinematography – Hard to say, but I think there is some Mad Max fury to be had.

Best Foreign Language Film – I can only embrace the inevitable pressure of failure.

Things will only escalate from here.
Feel free to witness picks from previous years here. 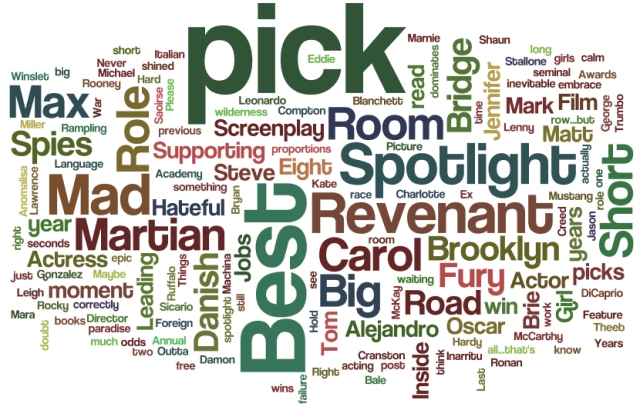 Another year, another crop of Oscar predictions. Can you whip it?

That’s unbeatable in the history of ever, so this year my goal is to accidently get at least four right.

I’m not that impressed with this year’s yield of movies. YAWN.

Best Picture – Ho hum, nothing special. So I’m voting for the movie I want to win, not the one I think will win.

Best Actor in a Supporting Role – Whip it. Whip it good!

Best Actress in a Leading Role – Didn’t see Still Alice, but I got a feeling.

Best Actress in a Supporting Role – No clue, so…Patricia wins because her role took YEARS to perform.

Adapted Screenplay – Maybe American Sniper has a chance, but not my pick!

Original Screenplay – I can’t imagine any of the other choices winning. Lock.

Best Animated Feature Film – Didn’t see any of these, so I’m going with Disney because they will crush your dreams if you don’t vote for them.

Cinematography – Crashing in the vast ocean and being eaten by sharks always wins. Or at least it should. 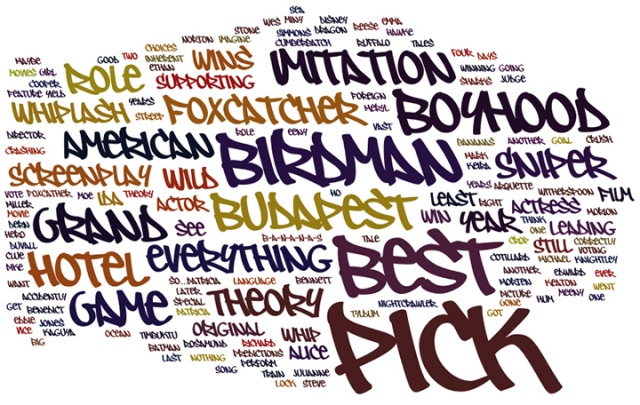 Every year, like clockwork, I pick the winners of select Oscar categories. My best is 6 correct out of 11. I’m barely above average. This Academy Award ceremony, the 86th of its kind, is hosted by Ellen DeGeneres.

This year, I’m going all in. Total domination!

Best Picture – I saw  five of these movies, and may see a couple more before the show on Sunday, March 2nd. So my prediction is nothing if not 100% accurate.

Best Actor in a Leading Role – Haven’t seen it, but I’ll give it to him for True Detective.

Best Actor in a Supporting Role – Lock. It took less than 30 seconds and a trip to Mars to make this choice.

Best Actress in a Leading Role – If you go crazy and talk to yourself (like me), you win!

Best Actress in a Supporting Role – The only choice really.

Original Screenplay – This will win something!

Best Animated Feature Film – I’m surprised Monsters University didn’t get nominated, so I have the opposite of a warm and fuzzy feeling about this one.

Best Director – Tough one. But Gravity seems harder to make.

Cinematography – I can’t imagine how any other movie could win this award.

I got 6 out of 11 picks correct! Better than below average!

…or are you just ready for Sunday, February 24th? Featuring the 85th Annual Academy Awards ceremony hosted by Seth MacFarlane, of course! Expect nothing. Give everything.

I’m here to boldly predict the winners. In less than half the categories. That’s all I can handle.

Yet, if I prove 100% accurate, I deserve my statue in the US Capitol Building. Well, at least a burning effigy in the parking lot.

Best Picture – I saw five of these movies. Therefore, I know the result.

Best Actor in a Supporting Role – The irascible one shall prevail.

Best Actress in a Leading Role – Not the Hunger Games! Or Lincoln for a change!

Best Actress in a Supporting Role – I dreamed a dream. And it was all about Anne Hathaway.

Original Screenplay – Something tells me I don’t know what I’m doing, so let me pick…

Cinematogaphy – Tiger blood and being lost at sea – and no Charlie Sheen? Winning!

Best Foreign Language Film – When you’re nominated for Best Picture and don’t win, you win this.

I’m here to boldly predict the winners and sneer at the losers. If my boldness proves correct, what do I win? I hope it’s a puppy.

Best Picture – I saw four of these movies. That makes me an expert.

Best Actor in a Leading Role – It’s Clooney’s year. I just know it!

Best Actor in a Supporting Role – If you’re old and gay, you win.

Best Actress in a Leading Role – Meryl gets nominated every year, only to lose to someone that was slightly better. Same this year.

Best Actress in a Supporting Role – It’s a helpful year.

Adapted Screenplay – I think people will honor Martin Scorsese’s love letter to film and he’s not winning elsewhere. Though Moneyball could win.

Best Director – Woody and Martin? No. If they give it to Terrence Malick for his turd sandwich, I quit.

Cinematogaphy – Probably the Tree of Life, but I’m rooting for the horse.