On a healthy nine-hour layover in Panama City, I arranged a tour bus to see the Panama Canal ($30 which included: a long stop at a mall (blah), photo and souvenir shopping stops and finally to the Canal).

I was able to watch a cruise ship (Seven Seas Mariner) go through the full process. It was interesting to see how everything operates so smoothly. I’ve seen ships pass between the Puget Sound and the freshwater Lake Union at the Ballard Locks (Hiram M. Chittenden Locks) in Seattle, but on a much, much smaller scale. Those locks also have a very cool salmon ladder.

The Miraflores Locks also had a museum, which I only had about 15 minutes to rush through.

Here is a look at the ship passing through! 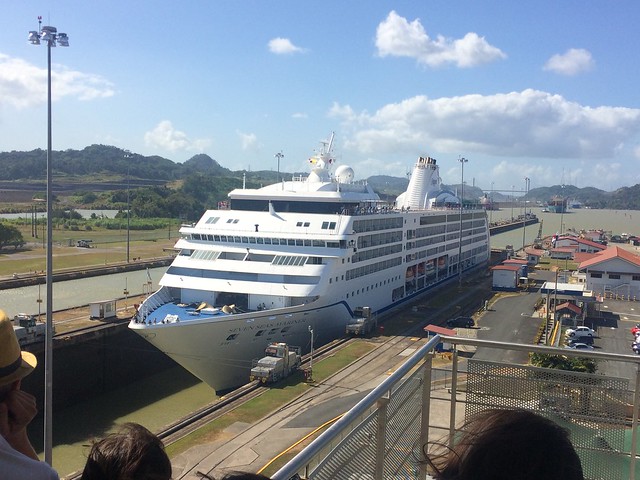 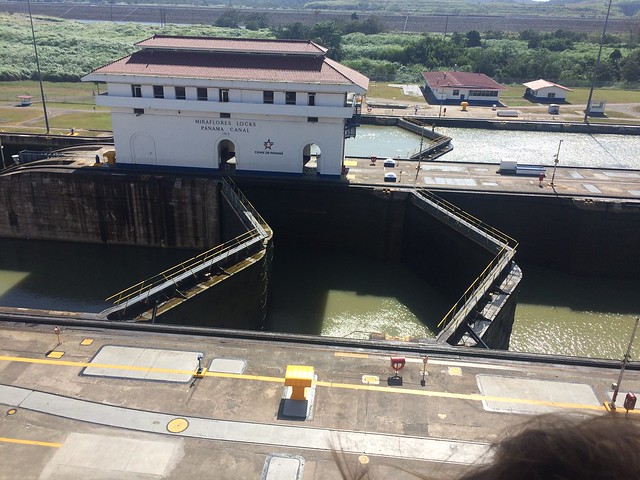 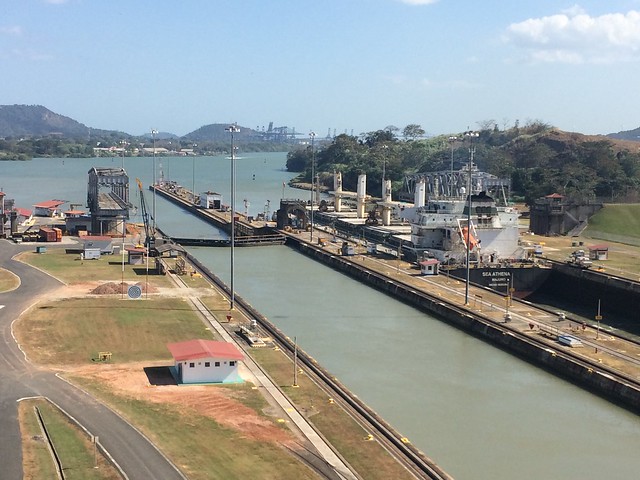 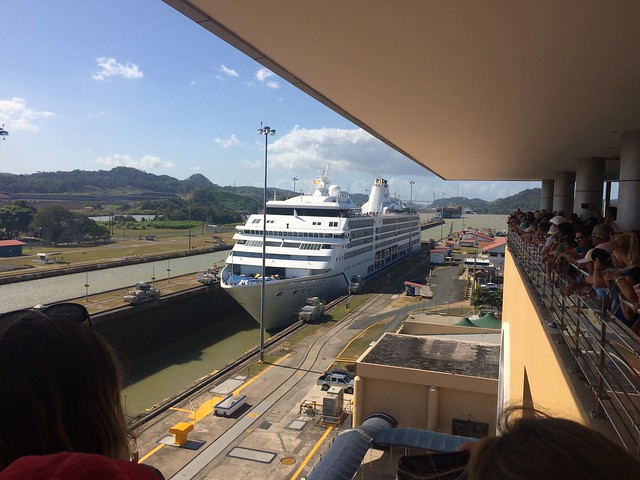 END_OF_DOCUMENT_TOKEN_TO_BE_REPLACED

Fact: Less than 20% of the American people actually cast a vote for Trump.

Truth: People are standing up to oppose him at unprecedented levels.

Alternative truth: Get over it. He was elected, so give him a chance. #altTruth

Reality: The people of this country are divided around many issues, and always have been, which is good generally when healthy debate can be had, and people can find common ground to work together on issues that are important to all.

Reality: We all live in our own bubble. It’s called life. We have all lived a different one. Our perspective is shaped by experience and interactions and the pursuit of knowledge, among many other things. Give the person next to you a chance first, before making sweeping generalizations.

Disclosure: I did not vote for Trump. I did not agree with his policies before the election, and more so now. I will stand up against things that I believe are fundamentally wrong and things that I believe will hurt me, my fellow Americans, and those that immigrated to America, which is all of us – just at different times (yes, even Native Americans immigrated here – a long, long time ago). It does not mean I am automatically at odds with people that voted for Trump. I know many that are good people.

Alternative disclosure: I like kittens more than puppies. #altPets

2017 is here! New Year’s Resolutions sound so passé, so I do Bold Predictions. This is that.

But don’t get too worked up, predictions and resolutions amount to the same thing, right? No idea.

I like counting, so I liberally litter these predictions with numbers. Often ones I can’t even count to.

2016 was a year that lasted 366 days, and is now over. You can skip to the bottom to see how I did on my 2016 Bold Predictions…not too bad actually if you have low standards.

…finish my Major League Baseball stadium quest that is years in the making! You heard me! Only two stadiums left! San Diego and Kansas City.

…read six books I own that I haven’t read. I have so many…

…organize, clean and get rid of stuff. On an epic scale.

…steal your dog to play with. Forget to give it back.

…visit two new countries (one more than last year). Result: Success! I went to both Honduras and India for the first time.

…run in at least four races (one more than last year). Result: Fail! I only ran one race, the Semper Fi 5K. I tried to run the Army Ten-Miler but had to travel for work. I did the One Day Hike (50K) for the fifth time, but that’s not running.

…find a reason to do something even crazier than the last time. Result: Last crazy time was whitewater rafting down the Zambezi River, so for this crazy time…let’s see…how about 4 nights/5 days backpacking in Colorado? A total of 43 miles with a 39-pound backpack while being stalked by a bear!

…take no prisoners and give no shits. Result: Hard to quantify this, but I tend to give a shit, so 1/2 right only!

…pick a few musicians and go deep into their music catalog. Result: Nope! Did not do this.

…play with two puppies. Result: This is a given. One of them was my niece’s new wiener dog, Jedi. He wants to come back to DC with me, I know it.

11. Brooklyn – A women finds love and a new life in America, but will Ireland draw her back?

10. Eye in the Sky – This moves more like a legal, ethics class, but I found myself fascinated by the drama and lengths they went to decide of ‘should they’ or ‘should they not’ launch a missile strike. And no real feel good results.

9. Creed – Maybe all the boxing movie tropes have been done and re-done by now, but watching Rocky become the mentor/trainer for his dead friend’s son, it still feels okay to watch them.

8. Captain America: Civil War – Punch, Pow, Pop! Superheroes mildly fight each other over a difference of opinion. It’s a total geek out, and you will be entertained.

7. The Shallows – So the premise is Jaws vs. Blake Lively. But what you thought might be a throw-away horror movie is nothing to throw away and is highly suspenseful.

6. Hell or Highwater – Chris Pine is basically in everything these days. With Jeff Bridges as a Texas Ranger chasing them, two brothers join together to rob banks to save their farm.

5. The Jungle Book – I didn’t expect all that much from a Disney re-make, but this is actually a damn fine movie. Bill Murray as Baloo? Idris Elba as Shere Khan? Scarlett Johansson as Kaa? Christopher Walken as King Louie? Heck ya.

4. Rogue One: A Star Wars Story – Good, I’m tempted to buy all the toys like I had as a kid for the first three movies. Darth Vader’s castle is cool. Now I need to see it again in IMAX 3D.

3. The Martian – Matt Damon on Mars! I need to watch this again, I just decided.

2. Spotlight – Wow, the Best Picture winner is the true story of the exposé of the Catholic Church in Boston. Haunting and sad and it makes you angry.

1. Sicario – Gritty, with a dark, underlying tone, this movie looks at US-Mexican border policies and how the US fights the drug cartels, but all is not as it seems. All is not rosy.

5. Scary Movie 5 – Let this franchise die. It’s not funny. Maybe if they made an actual funny parody movie (not that the first one was brilliant but it had its moments), we can keep it alive. But now please let it be offed in the most horror movie cliché possible.

4. Gymkata – Hahaha! I watched this during a ‘bad movie’ night. It was fun to pick it apart and laugh at all the WTF moments. Watch it with a group of snarky people, and you will find fun where there should be none.

3. Zoolander 2 – Don’t do it. Okay, you will if you saw the first Zoolander. But you will still regret it. And I will have told you so.

2. The Lobster – I hate this movie. I’ve often been annoyed with Colin Farrell as an actor and the films he’s been in (yet there are good ones like In Bruges), but this takes the cake. Weird, oddball, strange are words you could use to describe this movie. I choose the word ‘terrible’.

1. Joysticks – I listen to a podcast called Stack of Dimes. They started a new series of episodes to review bad movies that somehow made it to Blu-ray. They featured this one, which is supposed to be a Porky’s knock-off from 1982. Not so bad it’s good. Just so bad.

END_OF_DOCUMENT_TOKEN_TO_BE_REPLACED

Hop on board, this new year is about to get interesting! Let’s leave all the ugliness behind us.

Goal for December 2016: Do all 11 items on my painstakingly (for you) curated To Do List.

Sip at three new (to me) breweries – Always looking to have a brew or three, see. Of course! Beer is good! I went to Odd Otter Brewing Co. (Tacoma), Populuxe Brewing and Maritime Pacific Brewing Co. (Seattle).

Take a road trip – But where to? Buckle up. Did a few short trips around Washington State; to Mt. Rainer, Seattle and Arlington/Marysville.

Experience two Oscar buzz movies in theaters – Someone has to do it. Well, I kind of did it. I saw Arrival and tried to see La La Land (but it was sold out). I saw Rogue One, which should get 3-4 noms for music and special effects. So there, I’m claiming it!

Eat or drink at four new (to me) places, like coffee shops, bars or restaurants – Keeping up on my goal from Oct/Nov on trying new things. Did it! No sweat.

Get some snow on me – What is winter without wonderful white snow? I threw a few iceballs and did a five mile snowshoeing trek in Mt. Rainer National Park.

Hike! 20 miles at least! – Walk it off. I already achieved and more the hiking goal I made this year (read: hike 250 total miles), this is gravy. Done! And done!

Get rid of some stuff – I have clothes to donate, and some other things that need to go. Unclutter. Tidy. I organized a bunch of things to get rid of. I only managed to donate a few things to the 9:30 Club’s holiday charity. Plus I chucked some stuff still at my parents house.

Watch the Washington Huskies in the College Football Playoff Game (Peach Bowl) – I won’t go to the actual game in Atlanta, but I’ll be watching. Oh yes. Go Dawgs! I watched it at The Loose Wheel in Puyallup (which was surprisingly packed out with UW fans). Did not like the result, no I did not.

Wild Card – Something that in hindsight, should have been on this list! I went to visit the Tahoma National Cemetery near Kent and Covington, where 3 of my grandparents are buried in honor of military service. Jack Parker (1921-2006), Walter Bailey (1919-2016) and Verla Bailey (1927-2013).

Bonus Wild Card – I attended my sister’s wedding at The Rustin Chapel in Tacoma!

I added 68 new albums to my library. I attended 37 concerts (or 106 music sets), including hitting up the 5th annual Firefly Music Festival. I also wrote concert reviews for 23 concerts and five days of festivals!

Honorable mentions: ‘Better Nature’ by Silversun Pickups; ‘Delirium’ by Elle Goulding
*Does not have to have been released in 2016.