Since early 2010, I’ve listlessly listed the five (ish) new TV shows that look the most interesting for that season. That worked out to 20 different new shows.

I looked back at those lists and discovered the following morsels of unimportance:

Agents of S.H.I.E.L.D. – Marvel’s insurgence into the small screen after taking over the big screen the past few summers. Co-created by Joss and Jed Whedon, this I’ll definitely watch.

Almost Human – Karl Urban (Bones on the new Star Trek) is a not a doctor but a cop with an android for a partner. In the future.

The Crazy Ones – Robin Williams. Sarah Michelle Gellar. It’s not Mork & Mindy but why not.

The Tomorrow People – Another superhero in high school show..maybe it will channel Heroes…

Set your DVR to stun!

If you have it in your head to drive to Boston from Washington, D.C., pause and reflect on the following treatise. I’m only going to say this once.

Reason 2: Traffic. Seriously, Boston? You guys stink. You have the worst traffic! I’ve been to such places as Tokyo, New York, San Francisco, Bangkok, Nairobi, Sao Paulo, Johannesburg, Los Angeles, Seattle, Washington, D.C., London and plenty more. Based on my replicable and highly scientific opinion and the fact that I was there only a week ago, you win. Congrats.

Reason 3: The design of the city roads makes no sense. Zero. Zilch. Nada. You can’t get to Point B from Point A. Can’t be done. Don’t try. You can get to Point Z, if you close your eyes and don’t care where Point Z is. You can check-in anytime you like, but you can never leave.

Reason 4: Emergency and service vehicles clog the roads. Is that a dead guy with five police cars and two ambulances on this tiny one way street? Yes, turn around if you can. Oops, is that another accident two blocks away blocking your detour of the last accident? Why, yes. Now that you’re completely off track, is that bridge closed because some drunk dude is blocking traffic? Absolutely. Pat yourself on the back if you manage to somehow sneak through this labyrinth of craziness.

Reason 5: Construction. Unions must have a deal with the city to churn up every road at 100 yard intervals and then sit around all day long. I’m picturing something out of The Departed, with construction crews busy burying broken bodies…

Reason 6: Traffic lights. I spent 25 minutes at one intersection, that had to be the worst designed and most poorly timed light on Earth. But I rather enjoyed it, because at least I understood what was happening. Unlike Reasons 3-5.

Reason 7: Gas prices. That’s a solid 900 mile (both ways) road trip without detours. It won’t cost as much as a flight, but when you add in a rental car, it sure is close.

Good Reasons to Drive to Boston

Reason 1: You have a wiener dog riding shotgun.

Reason 2: Cool wind in my hair, the warm smell of colitas rising up through the air.

Reason 4: To listen to all the music and podcasts you need to catch up on.

Read this again for the first time!

If you need free advice on critical issues that impact your life, please keep reading. If you’re looking for minor chuckles, please proceed to the latest Dilbert comic strip.

Fresh Advice: Unless it’s food or flowers, don’t use the word fresh to describe anything.

Oral Fixation Advice: Unless it’s yours, don’t put it in your mouth. Even if it’s fresh.

Mom Advice: If you can’t say something nice, by all means blog about it.

Booty Call Advice: If you’re having trouble sleeping, the best course of action is to call someone and keep them awake as well.

Spirit(ual) Advice: If you have the choice between beer or wine, DO NOT choose one. Choose both.

Music Advise: If you’re debating whether to use your $1.19 to download Justin Bieber or Miley Cyrus…you’ve already lost. No one can help you.

Trend Advice: If you don’t know what ‘twerking’ is, pause now and let out a huge sigh of relief.

Baseball Advice: If you think more than two countries should play in the World Series, that’s un-American. And un-Canadian (at least circa 1993).

I Don’t Always Give Advice But When I Do Advice: Do not let the most interesting man in the world buy you a Dos Equis. You won’t be interesting by association.

Life Advice: If you ask for forgiveness instead of permission, I won’t forgive you.

Buisness Model Advice: If you don’t want companies to run ads on your blog, pay them not to.

Best Advice: If you’re not willing to take free advice, you can always pay me for it.

(or when I get around to it)

In July and August both my random goals were about clocking miles and keeping the blood pumping. Since this is an exhaustively fact-based blog, I crunched a bevy of numbers and dug deep for timely, hard-hitting analysis. That is a fact.

Let’s roll up our sleeves and shoot our veins with sweet, sweet PEDs.

Analysis: Boom! I did it. It really sucked! Peace!

Yeah, this was really hard because I traveled to Washington State for the last seven days. I managed to get a good hike in at Mt. St. Helen’s (8 miles) and did some runs the last few days, including a last-minute (like 10pm on July 31st) 2.5 mile run to pull it off. I could have quit or stopped or said fuggedaboutit. Trust me, I really wanted to. I don’t win anything. I don’t make any money on this. But it’s forever immortalized on this insipid blog, so I went the extra mile to get those many miles. Now you know. 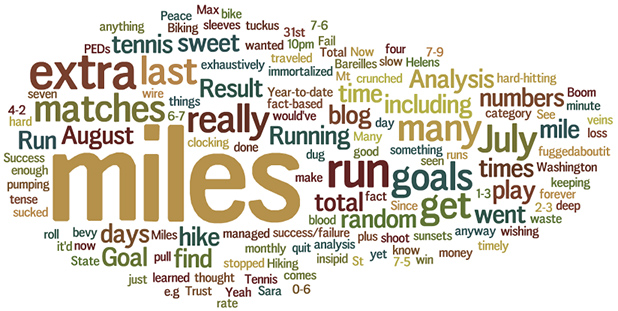