On May 18, 1980, Mt. St. Helens erupted, destroying everything north for miles and miles. Obliterating old-growth forests. Causing the largest recorded landside in history. Transforming the then 9,677 foot volcano into a shadow of its former glory (removing a scant 1,314 feet off the top). Spewing ash into the atmosphere, before raining down like a blizzard in 11 states.  Killing 57 people. Sprouting baby volcanos (called Hummocks) out of the fiery earth. The desolation was complete.

But 33 years has a way of bringing about transformation. Nature cannot be denied. Wildflowers show no mercy.

It was in this explosion of wildflowers, new trees and green poking out of the once desolated moonscape, that I found myself and two others hiking along the Boundary and Truman Trails towards the Spirit Lake viewpoint. Words end here.

Watch out for the wildflowers.

Didn’t watch the movies from your Summer list? Forget them! The future is now! After giving Entertainment Weekly’s Fall Movie Preview a scant bit of attention, I’ve picked the crop of movies I need to see this Fall.

All Is Lost (October 18) – Robert Redford lost at sea!

Ender’s Game (November 1) – Based on the brilliant (and Nebula award-winning) novel, this is a must see. Plus, Harrison Ford.

Thor: The Dark World (November 8) – More Marvel movies than you can shake a stick at!

The Hunger Games: Catching Fire (November 22) – Part Deux. Let’s see if Jennifer Lawrence can walk up steps in a dress without falling!

The Hobbit: The Desolation of Smaug (December 13) – Elves. Dragons. Dwarves. Part 1 was just okay, hoping this one will step up.

Anchorman 2: The Legend Continues (December 20) – Milk was the wrong choice! Here’s to a whole new crop of one-liners to quote for the next 10 years.

Others to consider: The Counselor, Runner Runner, Gravity, 12 Years a Slave, Parkland, Riddick
Don’t forget to butter your popcorn!

My random goal for August is to maintain a general fitness routine, but not make it overly ambitious or difficult.

July was difficult (post coming) and I’m nothing if not lazy, especially in August! (My goal for August 2012 was to go on vacation…)

I joined a tennis league (TennisDC), so we’ll see how often I can get out to play.

I need to run a bit to stay in serviceable* shape for the upcoming flag football season. 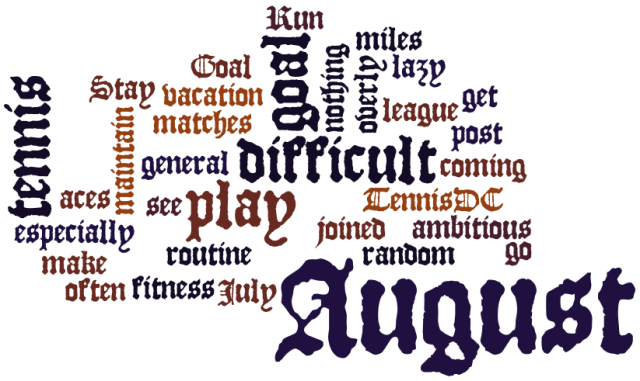